Her arms stretched out above her head as the blinds rose up the length of the floor to ceiling glass, as they did every morning. It was an automated process that she had no control over. She’d never known anything else, oblivious to the monotony of her situation.

As the glass was exposed, rays of bright, early sunshine filtered through and bathed the wall opposite in a glorious sunrise of colour. She sat up in her bed, surveying the world outside. It didn’t matter what she wore, if she was naked or in a ball gown, there were no neighbouring windows or buildings that allowed a view of her. She was a perfect secret here.

This was how life was for girls like her, trapped in their ivory towers under the premise of keeping safe. But what was safety without life? Her mind was so closed off to any other existence, she had long ago stopped pondering the what if’s.

Her long, pale legs swung out of the bed as she tucked lengths of soft, dark hair behind her ears. She held her fingers up in front of her and counted down.

Perfectly timed as ever as his voice rang out. The only male voice she knew – it saddened her that it probably wasn’t even real. Was anything real anymore?

“Good morning my city friends. It’s another beautiful day outside, but that lack of cloud cover is going to make the air levels sting. Stay inside, stay safe.”

Nothing new there… She thought as she headed towards the bathroom, knowing the voice would follow her.

“Little known fact, but today is international day of the rose. We don’t see them often anymore but let’s all take a moment to envisage.”

She stood still and closed her eyes as the man’s beautiful voice washed over her. Every day she found herself wondering if he was real or not. Regardless, something in that voice hypnotised her, it was the highlight of her day, the reason she awoke with a smile.

In her mind, a gust of wind blew an array of rose petals across her vision. They slowly wrapped around each other, dancing themselves into buds and flowers of exquisite beauty. She noticed the dew on the outer petals, as the dusky scent flowed up into her nose, completing the image.

She leant back against the wall as a wide and satisfied smile played out on her lips. She loved to think about the flowers. Something about his voice made them real in her mind. She could almost touch them. Almost. She longed to touch something other than these walls.

beneath this obsidian veil

where our souls collide…

Her breath paused; her body frozen to the spot. What were those words? Suddenly time ticked again, her heart hammered so fast she felt sure there was something physically wrong with her.

The morning announcement had ended. That voice she thought of as her only friend. Had he finished with those words? Had her own mind made them up as she thought of the rose? She had no idea, all she knew was that she had to memorise them… now.

The steaming water from the shower poured over her for the longest time as she repeated the beautiful words over and over. She’d never felt this alive, she needed those words imprinted on her mind. They gave her a purpose she couldn’t yet comprehend.

She couldn’t leave them alone. Maybe these words… were what she’d been waiting for her whole, lonely life.

He sank his head into his waiting hands as she entered the bathroom, the one place the staff couldn’t see into. The way she’d looked, her slight body back against the wall… When she’d began to conjure the image of the rose, he noticed her sink into the feeling, her eyes dreaming as the slow smile crept over her lips.

He hadn’t meant to say those words – they just unburdened themselves from him. She literally didn’t know he existed, she thought he was just an automated voice that made announcements periodically but to him… she was everything. The world turned just for her; the sun rose just so he could speak to her. He wouldn’t do anything to endanger his brief glances of her, as frustrating as they were, so why had he gone off script? He cursed himself, shaking his head and trying to concentrate on the job and not his emotions.

His nerves were frayed for the next week, if anyone had heard, he’d be pulled into a supervisor’s office and taken off this duty instantly. He couldn’t bear life without her, it wasn’t a possibility for him.

Yet it seemed luck favoured him, his slip had escaped notice. All was peaceful. The morning routine carried on just as before. Every day he asked her to envisage something, but not everything had the same effect on her. He was eager for a sensory experience she would enjoy. Seeing her happy, even for fleeting seconds, fulfilled him.

His head was always bursting with these words and thoughts, as though with every beat his heart sent them, full of love, rushing to his brain, just engorging the adoration that already lived in his every cell.

He was edgy, and he knew she could sense a change in his voice. When she woke up and stretched, she tilted her head ever so slightly to the side. Barely noticeable to anyone else, yet he knew it signalled a degree of confusion. She was adorable when she did that, the way the skin between her eyebrows crinkled oh so slightly… It didn’t stop her from raising her hand.

One. Two. Three. Her soft lips mouthed the numbers.

He began his announcement, already excited as he knew she would like what today was.

“Good morning my city friends. It’s a damp, rainy day today. The clouds might be keeping us secure, but that rain will cause injuries. Stay inside, stay safe.”

“I know you all love my little facts, today is international day of the baker. Bread may be a rarity for us, but let’s take a moment to recall.”

She was in the same spot as always. Standing sideways, leaning her hip and shoulder against the wall as she flicked her hair behind her. Her eyes were closed but he saw her muscles relaxing as she envisaged the freshly baked bread. She took a deep, long breath and he was certain she was letting the smells of the baking dough travel into her mind.

Then, her tongue licked along her perfect lips, those untouched, inviting lips and he knew she was surely feeling the warm bread against them.

Before he knew what was happening, the words were there. He was powerless to stop them.

Do not think my love for you will fade

between all of these monsters of us

I crave the oblivion of your touch

Her eyes sprang open and searched the ceiling and walls, not knowing where to find him. He saw a glistening tear fall from her eye, matching his own which he now realised fell down his cheeks.

She sighed sadly and pressed her forehead to the tall mirror opposite her bed. Her mouth repeating the words over and over. It warmed his heart, and crushed it, all at the same time.

Then the alarm sounded.

It was over. It was all over.

But at least she knew, she knew she was loved.

That was all that mattered anymore.

Nicola approached me with this incredible piece, after reading the featured poem.

She has a novel coming out very soon! This is one that you don’t want to miss. 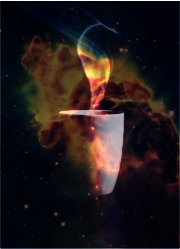 Coffee is the substance that sustains me. It is the fuel that allows me to create. Buying me one (or a few) would be great way to support my work here. Thank you.